History and Development of Pajamas

Pajamas are clothes for sleeping, which is usually regarded as leisure dress. If someone is wearing a pajamas on the street, people will think that he knows little about dressing etiquette.

Although wearing pajamas is comfortable, it will not be solemn and impolite if you go to work in a pajamas. Pajama is part of personal privacy. Everyone wants to have their own space. If everyone is wearing pajamas to go to work, there is no private space anymore . Wearing pajamas at home is to create an atmosphere of being away from the workplace and relaxing. On this basis, designers improved different styles, such as fashion pajamas that can be worn outside, not limited at home.

At the beginning of the 20th century, pajamas were as artificial as other types of clothing. Whether it was women's pajamas, couple pajamas, boudoirs or tea robes.they all had exquisitely draped decorations and layers, beautiful but unpractical. During this period, pajamas fabrics were all made of luxurious silk velvet, which are the belongings of the upper class.

With the advent of the first world war, the robe became less loose, and a simpler style that is more masculine appeared. After the war, the tourism industry in Europe and the United States flourished, so that the clothing store began to make sleeping bags, bedspreads, pillows and sheets, matched with women's pajamas, which led to a popularity of bedroom series. At the same time, because of the need of travelling, the style of pajamas is getting more and more brisk.

With the beginning of the Second World War in the late 1930s, nightlife gradually disappeared, so there was almost no demand for high-end women pajamas. Mainstream at this time was ready-to-wear clothes, such as all-weather wearable flannel nightdress that can be worn as an evening dress, light chiffon silk pajamas that are easy to wash and carry, and dyed cotton lightweight sleeping gear with adjustable waist. 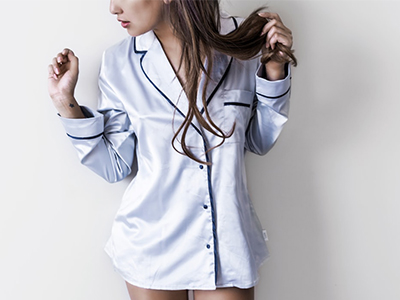 In 1945, the end of World War II, the economy recovered, and the beautiful feminine pajamas re-fashioned.

In the 1950s, like other women's underwear, pajamas became mainstream. With the innovation of industrial technology, nylon fabrics are widely used, bringing innovation to the clothing industry. There are a variety of underwear, pajamas, styles and diversified styles from dignified and noble to short and sexy. Many underwear brand came into existence.

In the 1960s, with the rapid development of the commodity economy, women's underwear and dressing gowns with reasonable price and good quality were widely sold as ready-to-wear in stores, pajamas and underwear entered wardrobe of every woman.

After the 1970s, pure cotton sleepwear began to become obsolete as cotton and nylon yarn blends such as polyester became more and more popular. High-end pajamas come in the form of silk, cotton, wool and mixed cotton. The color use also became more richly  in the late 80s, and the luxury taste also leads consumption to high prices.

The 1990s is a modern stage.The advancement of technology and the streamlining of corporate personnel have enabled women to establish their own careers, they not only need to bring up children at home, but also work in the company. The pajamas market has expanded to include what people wear when they go home, and not necessarily what they wear when they sleep. In this situation, in addition to the pajamas series, the concept of home wear has been added. In addition to fashion, people are very concerned about what they wear at home, and home clothes have surpassed the basic needs just for wearing. Being cozy is the lowest standard, being sexy and beautiful is what they want pursuit from pajamas.